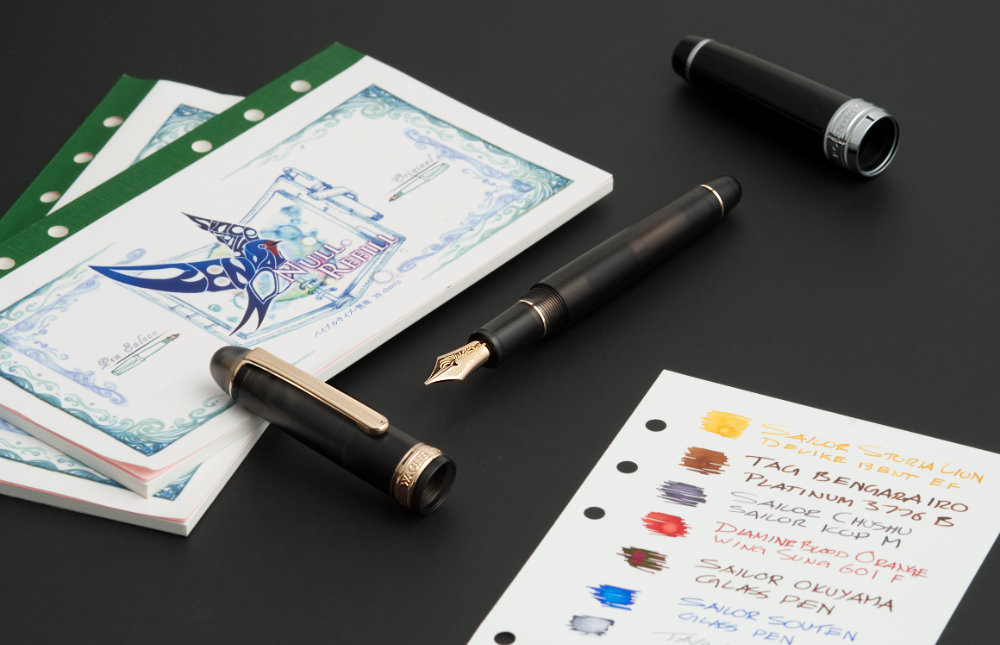 One of the joys of attending pen shows is discovering new products. At Wagner’s year-end event, I picked up a type of paper called Null Refill. It wasn’t the first time this paper was sold at a pen show I attended, but for some reason, I had missed it until now.

Null Refill is based on a synthetic paper called Yupo, known for its water resistance. Because of this property, it is commonly used for e.g. posters and shampoo labels. It isn’t considered fountain pen friendly, as it takes forever for liquid ink to dry.

A fountain pen enthusiast who’s worked in the printing industry, by the name Itsutake Demboku, decided to make a fountain pen friendly paper based on Yupo, but with a custom coating. His goal was to develop a paper that shows off ink properties as much as possible, especially sheen (or, as he calls it, “red flash”).

The name, Null Refill (or nuru-rifiru, ヌルリフィル), refers to the smoothness of the paper: The Japanese word for smooth is nuru-nuru (ヌルヌル), and according to Itsutake-san, this paper has no (“null”) toothiness whatsoever. I have to agree: It is a remarkably smooth paper.

There are two versions currently offered by Itsutake-san’s shop Pen Saloon: 30 sheets of “bible size” (95x171mm) paper, a common Japanese day planner format, and a smaller one with 50 business card-size sheets. Additionally, BunguBox has an exclusive A5 version, although it appears to be sold out at the time of writing.

I got the bible size one, which was 800 yen at the show, and is a bit more when ordering online. Definitely on the pricier side, but Itsutake-san says profit margins are thin.

Here is a size comparison against A5 and Traveler’s Notebook (regular): 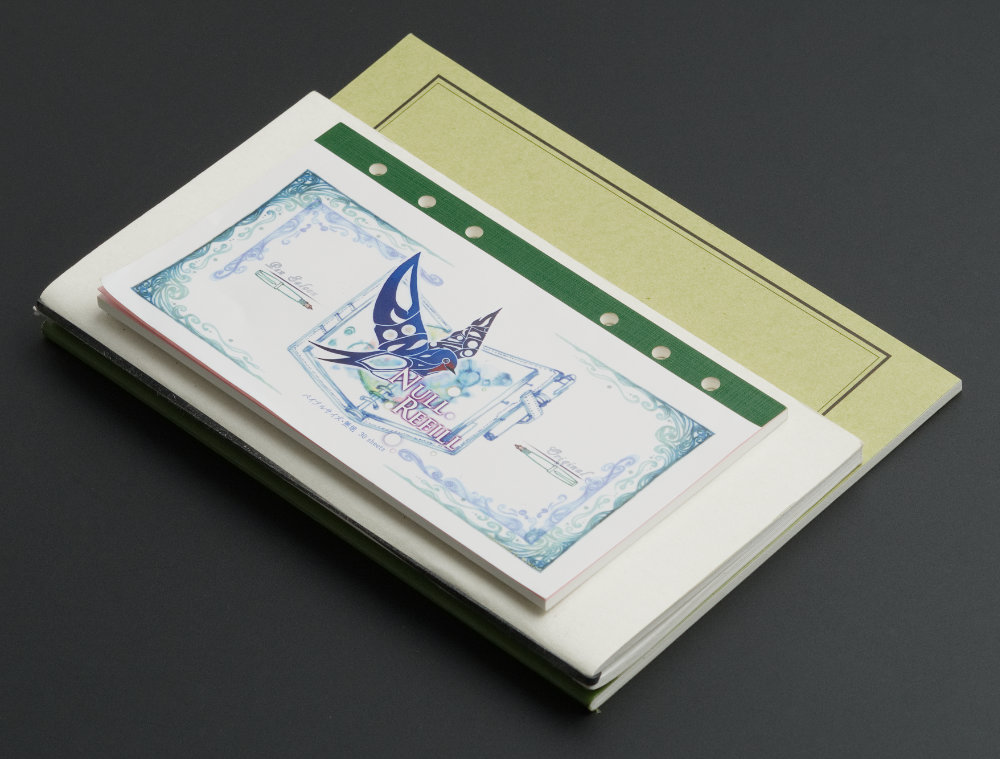 Given the claim that this paper is all about sheen, the obvious thing to do is a sheen-off contest against the reigning champion and 52 gsm gorilla, Tomoe River, here represented by a Jibun Techo Idea refill. To make this comparison as accurate as possible, I used a single light source and fixed camera, light, and paper positions. Here are the results:

TAG Bengara-iro in a glass nib:

Bengara-iro in a broad stub:

Sailor Souten in a broad stub:

Sailor Yonaga in a broad stub: 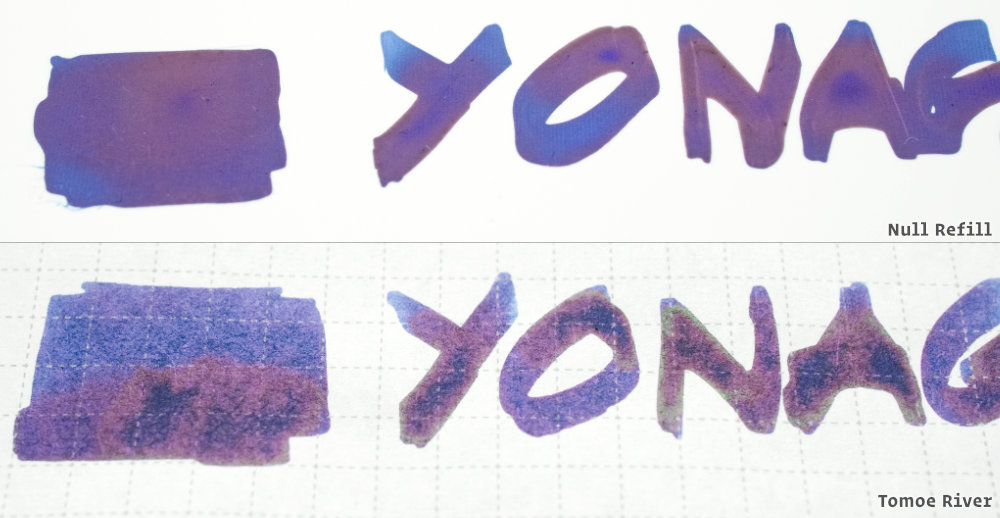 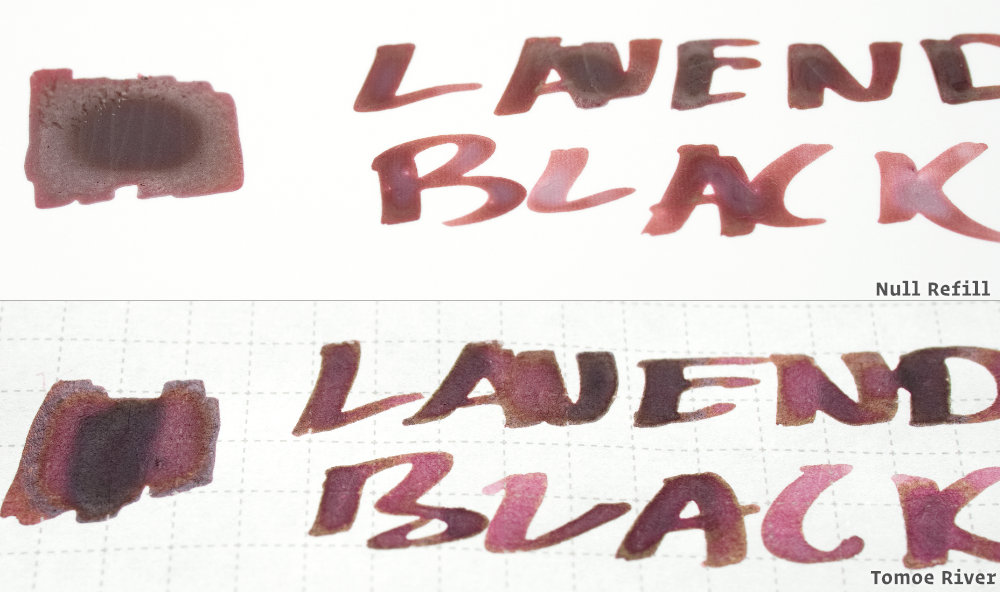 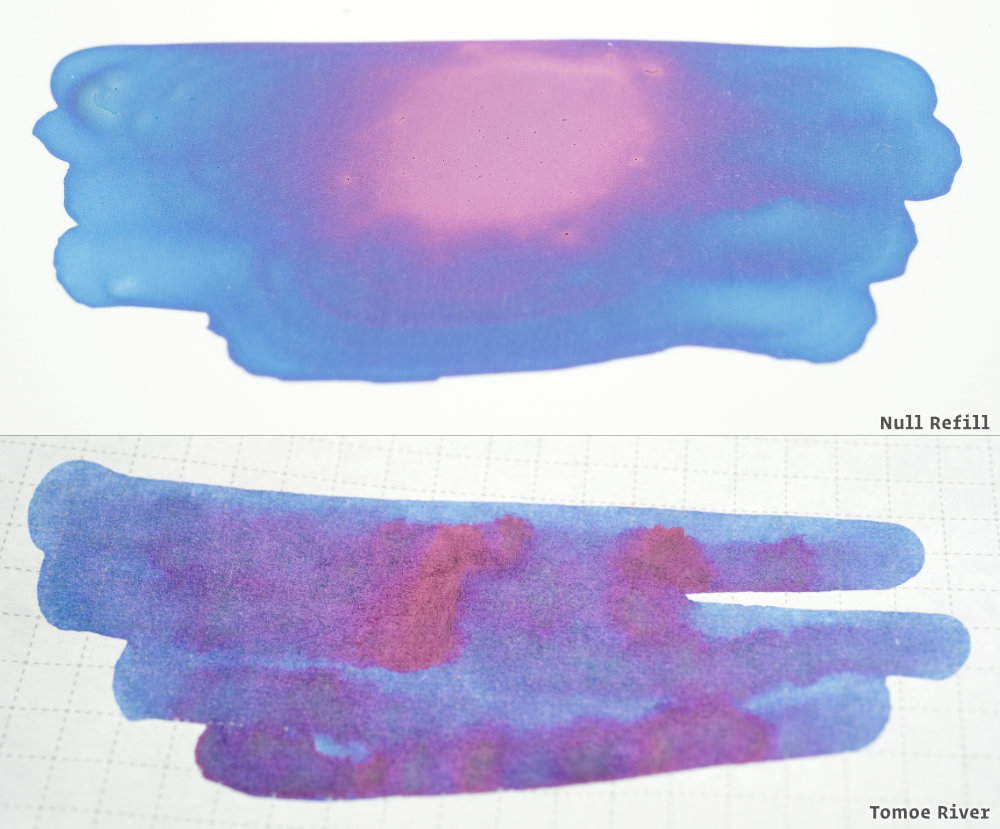 So, does Null Refill out-sheen Tomoe River? Possibly, but it certainly looks different. Tomoe River sheen looks grainy and uneven, while on Null Refill it’s smoother. With certain inks, it looks like text is glowing, with a sheening aura. Also, that cotton swab looks creamy.

Sheen aside, ink does look good on Null Refill, as shown here from a different angle with less pronounced sheen: 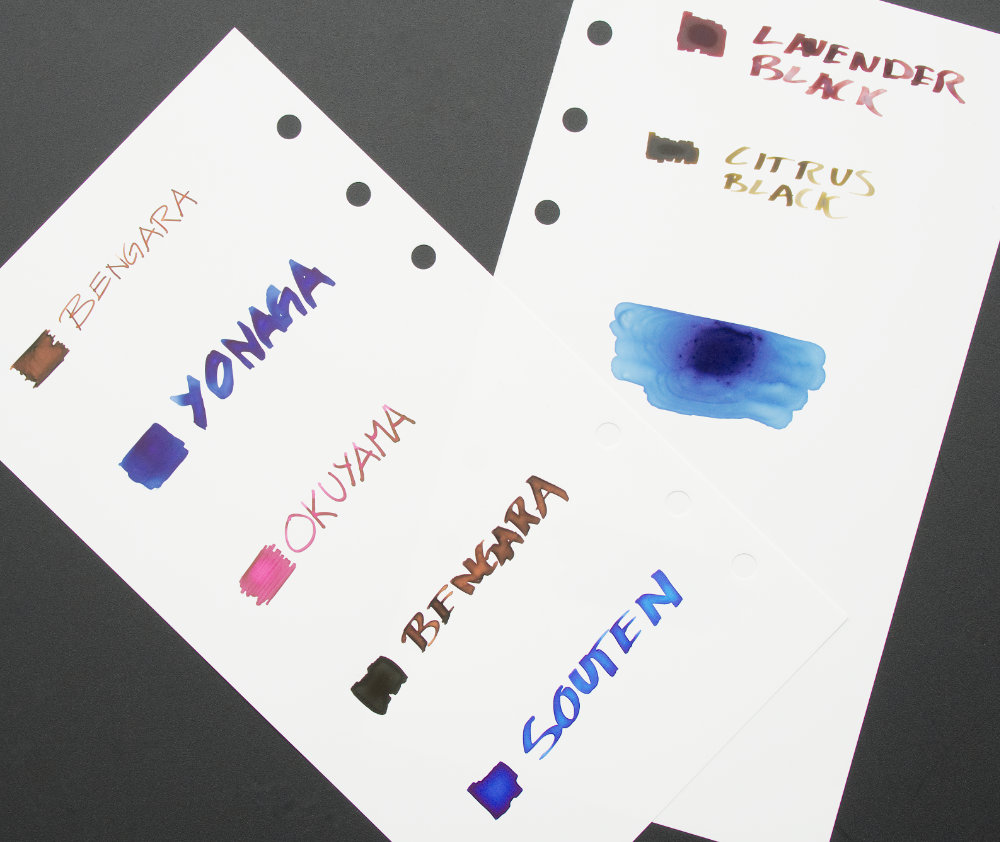 While Null Refill is unlikely to dethrone Tomoe River as a general-purpose paper for fountain pen and ink lovers, it is fun to use, ridiculously smooth, and colors certainly pop. It’s worth a try if you can find it.

Update Jan 17th: According to Itsutake-san, it should be possible to order the bible size version from Amazon JP and ship oversreas. Additionally, BunguBox’s A5 version is back in stock.

Update Aug 25th: Null Refill is now available in the US!