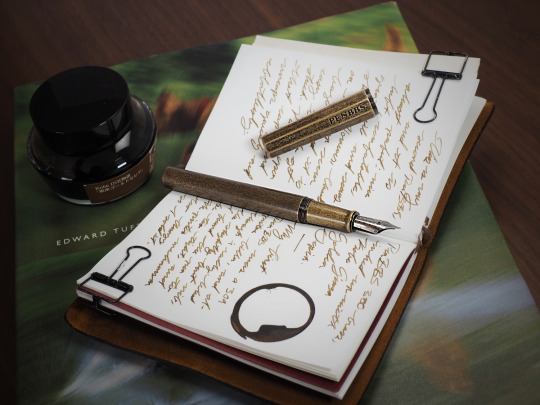 My first PenBBS pen was a white 309 piston filler. I liked the nib a lot, a #6 size fine steel nib slightly bent upward, almost like a waverly nib. However, the rest of the pen wasn’t quite to my liking: Too light and with a somewhat cheap overall feeling, especially the piston mechanism. So I ended up selling it after a while.

After watching chrisrap52 repeatedly singing praise of PenBBS, I was keen on giving the brand another try, but I wanted a pen with a bit of heft, as I find it more comfortable to write that way. When PenBBS 350 came out, I quickly ordered the brass version.

This PenBBS came in a box I hadn’t seen before. Instead of the slim black coffin, this one came with a wider one in frosted plastic, which many modern Chinese pen makers favor, with an outer cardboard sleeve. What’s most striking about the new packaging is that most of the text is in English. Perhaps PenBBS are now aiming beyond the domestic market. Their new Etsy store indicates this as well.

Interestingly, the box contained something else: A screw-in roller ball end. I haven’t tested this yet, but wonder if it’s a novelty limited to this 350 model or a strategy to broaden their customer base. 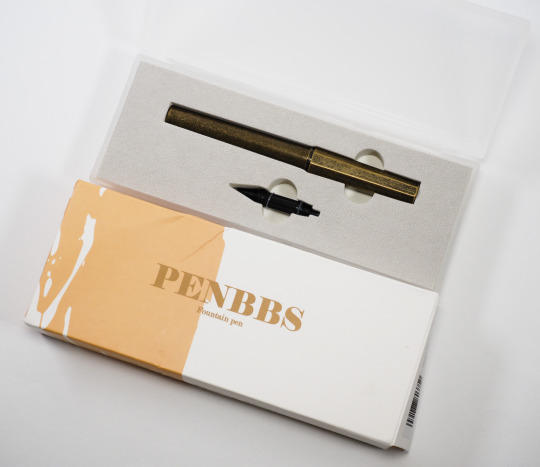 It’s hard to discuss the looks of PenBBS 350 without mentioning Namisu Ixion. Similarities are striking. I don’t know whether PenBBS directly copied their design or if there’s something more to this story. Regardless, it’s a functional design, with a faceted octagonal cap that functions as roll stopper, and not much in the way of adornments. Sensible minimalism.

This is a heavy pen, at 60g capped and 40g uncapped. It is what I wanted and why I bought the brass version; those who prefer lighter pens may want to look at the aluminum version, which chrisrap52 reviewed on Youtube.

As expected, the waverly-ish nib is smooth, even at steeper angles. Some line variation can be had by adjusting writing angle and even by applying a bit of pressure. This nib reminds me of Delike’s excellent bent EF nib, featured on both Delike-branded and some Moonman-branded pens. However, PenBBS nibs have a more subtle bend and write finer lines.

PenBBS pens use feeds I have not seen on any other Chinese pens. They are reminiscent of Montblanc feeds, with long, thin fins. So far I haven’t experienced any ink flow problems, even with fast writing. However, I have heard that it’s easy to damage the feed when replacing the nib. 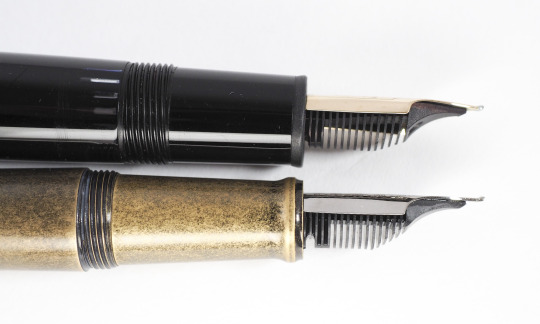 Unfortunately, this pen has one problem: Threads on the cap and section don’t always mesh well, at least on my pen, and I occasionally have to rotate the cap and try different angles to cap the pen. It could be a flaw unique to my pen. Either way, a bit of silicon grease made the problem less pronounced.

It is not the first time I’ve seen weak brass threads though. My Moonman M1 has similar problems, and it can take a few attempts to screw on the barrel after re-inking the pen. My knowledge of metallurgy is limited, to say the least, but I understand from Wikipedia’s article on brass can it be somewhat soft, depending on proportions of copper and zinc used. It makes me wonder how suitable it is for threads.

Another minor issue is that the logo engraving on top of the cap isn’t centered. This is something chrisrap52 noticed on his aluminum 350 as well, so it may be a common problem. Harmless, of course, but noticeable.

I like the rugged no-frills appearance of this pen and find it quite comfortable to hold. It is a true workhorse ben, meant to be tossed around. It wants to be thrown in a backpack and not sit in a display. The threads issue is annoying but manageable. 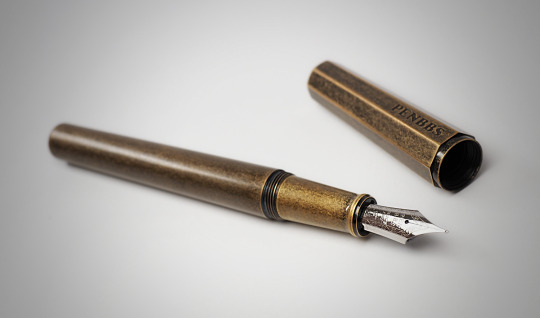